Allergy Awareness in the Food Industry 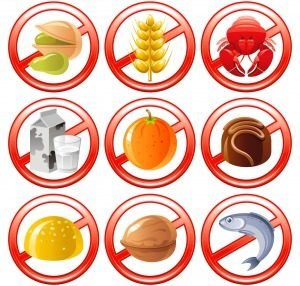 “Did you know that in the UK an estimated 2 million people are living with a diagnosed food allergy?”

And there is evidence that the number of people who have adverse reactions to foods such as cows’ milk, tree nuts and peanuts is increasing.

The most at risk groups include young people, those in their teens and early twenties as they start to make their own independent food choices.

Virtually all known food allergens are proteins; they can be present in the food in large amounts and often survive food-processing, including cooking.

Very small amounts of an allergen, sometimes less than one milligram (one thousandth of a gram), can trigger a reaction which can be severe and on rare occasions fatal.

Allergic reactions are characterised by the rapid release of chemicals in the body that cause the signs and symptoms, including;

The symptoms of a severe allergic reaction (anaphylaxis) can be sudden and get worse very quickly.

The initial symptoms of anaphylaxis are often the same as those listed above and can lead to:

which can occur within minutes or may take an hour or more after ingestion of the allergen.

However, one of the problems the food allergen sufferer faces are the common misconceptions surrounding the condition such as;

However, the reality is far different to the individual concerned as a food related allergic reaction can be life threatening.

Although, at the time of writing this article, there have been a number of high-profile tragedies in recent months, thankfully the number of deaths is low, approximately ten per year.

Whilst deaths from allergic reactions make the news headlines what does not is that more people per year are hospitalised due to food hypersensitivity (which includes allergic reactions) than through foodborne disease, including food poisoning.

The sufferer has to manage their condition through a strict avoidance diet, needing to obtain food ingredients information to avoid the food containing the allergen which would trigger off their reaction.

Eating out requires some organisation, potentially limiting where they can eat and the choice of menu dishes available to them, often leading to higher prices.

The key element for the consumer is that they have trust in the food business that they intend to use.

Therefore, providing accurate allergen information is vital to ensure the consumer can make correct choices in the food available to them.

Any customers with a food allergy, or their family / carers, should, ideally, notify you of any allergies, either when booking, or immediately on arrival.

Catering businesses are now legally required to comply with the Food Information to Consumers Regulations which means that allergen information must be available upon request.

You need to inform your customers if any food products you sell or provide contain any of the main fourteen allergens as an ingredient.

If you are selling, or providing, food direct to the customer, such as in a restaurant or café then the allergen information must be available in writing, this could be on a menu, chalkboard for example or by a written notice placed in a clearly visible position explaining how the customer can obtain that advice – for example speaking to a member of staff.

However, if this information is to be provided verbally by a member of staff then it needs to be backed up by the written information to ensure that it is accurate, consistent and verifiable.

Some of the challenges that a business may face in getting this information across include a number of factors such as:

Getting it wrong, whilst having potentially devastating consequences for the consumer, can have a significant impact on the food business owner and their business;

The sandwich consumed by Ms Marsh contained yoghurt that was meant to be dairy-free, but had later been found to be contaminated.  At the time of this article the full inquest has not been concluded

There needs to be good processes / systems in place, including dedicated storage, equipment and spaces to avoid inadvertently cross-contaminating other foods with allergens.

Communication with all stakeholders, suppliers, staff and consumers is also another vital management tool in order to communicate clear information with a good understanding of the issues by the person preparing food is essential and awareness of any changes that may have a detrimental effect on the allergy sufferer.

If a customer explains that they have a food allergy, listen to them carefully and if practicable let them speak directly to the chef or a senior member of staff, making sure that the customer’s allergy is noted clearly on their order.

If there is any doubt about whether a food is free from of a certain ingredient, admit to the customer that you are unsure but assure them that you will find out, do not offer to cater for the customer if you are unable to do so safely.

Careful consideration has to be given to all food and drink that may be part of a meal i.e. if someone orders a coffee for example, and has already informed you that they have a milk allergy, the customer will feel reassured that you have understood their needs if you remember not to include milk or a biscuit on the side, offer a milk alterative

There are many other ways that the food business can consider to help the food allergy sufferer make informed choices and remain safe;

By having allergy awareness at the forefront of your food safety management system and communicating it clearly with your staff, risk can be minimised and the customer is able to make an informed decision as to what dishes would be suitable for them and ultimately have trust in your business.

Give the customer the reassurance that you are taking their allergy seriously and they will become repeat customers and spread the word to other food allergy sufferers who are your potential customers.