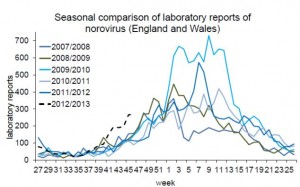 Britain is in the grip of a winter vomiting  outbreak which has already seen many thousands fall victim to the debilitating  virus.

Cases of the bug have surged to a   five-year high and the health service  has reported outbreaks at dozens of  hospitals.

Front-line health workers are being struck  down by the virus, leaving overstretched departments badly  under-staffed.

Experts say the norovirus bug has arrived  early this year and have warned the problem will worsen over the  winter.

Figures from the Health Protection Agency  show the number of confirmed reports of the virus – where samples have been sent  by hospitals or GPs to laboratories for tests – is up 52 per cent on last year.

However, this is a just a tiny fraction of  the real number because the vast majority of victims do not report their  symptoms to their GP. In addition, there have now been 53 outbreaks at NHS  trusts across the country.

This includes 45 hospitals which have been  forced to close off wards and find space for patients elsewhere while they carry  out a deep clean of the wards.